So remember when I was talking about how a meal plan is just that: a "plan", Plan A? And how sometimes you need Plan B for whatever reason. Well, I needed Plan B. The very same day I posted my plan. HA!

We had another rainy day and poor BigBoy has been dying with allergies. I think it's tree pollen, and I had hoped the rain would make it better. It did, but only a tad. When BigBoy doesn't get good sleep, he is crazy, really crazy. We also found out that Benadryl makes it worse. He goes psycho. So think about a sleep deprived 5 yo who is cranky, snotty and has swollen eyes. Now add crazy juice into the mix. You get parents who literally want to lock themselves in a closet and do tequila shots. That was my end of the week and weekend. good times.

We were also forcing ourselves to purge. It was slim pickins for sure, but we could do it. I made some d'lish berry oatmeal muffin cups. (I used molasses instead of sugar btw.) BigBoy and I so love oatmeal. These would work for a healthier snack and/or breakfast. Or dinner, as it turned out-- he ate three after we baked them. I also planned on doing roast chicken on Monday in the crock pot (instead of Wednesday) since that was beyond easy and we had everything and then I could use the rest as needed. * I will get to that in a bit.

Well, back to the rainy Monday after the crazy child weekend and a BigDaddy-less Saturday Night/all day Sunday. I wanted to get them out of the house, someplace to run around that was close to home and cheap. I thought about the bounce place, but Stubby is hurting and I didn't want to be jumping on it-- not an option if we go to the bounce place. Chick-Fil-A it was. We'd go before the lunch rush, get home in time for Sassy's nap, eat lunch at home and then I could hit the store for groceries after BigDaddy got home. Viola! Perfect! I finally get everyone loaded up in the van, after running in the house for the forgotten snuggle buddy... then over to the gutter tube that got knocked off... then back inside to grab the cell phone I forgot. I should have known. It was just too hard to actually get going. And then it happened. We were cruising along, pouring rain and Sassy fell asleep. Great.

The dilemma. Do we move forward as planned, waking her up when we get there and having a possible crankygirl meltdown? (The answer would have been YES.) But I didn't. We turned around, I told BigBoy we'd go later after her nap. We get home, she refuses to go back to sleep. She's tired. I know she's beat. But she plays, yells, sings. Everything BUT sleeping. Of course. I finally get her to sleep. The kids eat peanut butter toast on homemade bread for lunch. We get there for round two. "I'm hungry mom. REALLY hungry." uuuuugh. So I got us food. And me a classic sandwich as I realized I had forgotten all about feeding myself. Fast Food for dinner at 3 PM. What a mess. Totally NOT what the game plan was. Totally NOT the wonderful roasted chicken with potatoes and carrots for a nice sit-down family dinner after a perfectly planned day. Plan B.

Now about the roast chicken deal. One of the biggest challenges I've had with meal planning is figuring out the flow of everything. I had a whole chicken in the freezer, left it in the fridge to defrost last week knowing I was going to cook it on Monday. Monday morning I dug out the crock pot, added LOTS of thick carrot chunks, quartered potatoes with the skin on, and some sliced (or quartered) onion. I rinsed the chicken and set it on top of it. Sprinkled some garlic salt and Lawry's seasoned salt (NOT a lot). And then forgot about it for the rest of the day. I left it on high as I didn't put it in as early as I would have liked (we eat dinner early, like 5:30), but you can leave it on low if you are doing it before leaving for the day. If you don't have a crock pot, you really should get one. You can find them on sale all the time and you don't need a fancy one. They are life savers and allow you a very easy way to cook a meal. I have two, plus a big roaster.

So end of the day: You come home and smell the yummies filling your house. You now have a roasted chicken with veggies!! When you're done eating your fabulous home cooked meal, de-bone the meat and put it in the fridge for another meal (chicken salad sandwiches, enchiladas, BBQ chicken pizza, etc.) take the bones and any juice and throw them into a big pot for later. 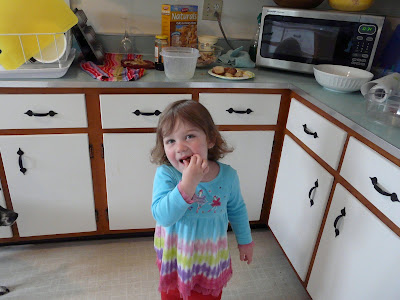 Be very careful of "helpers" who eat all the goods! 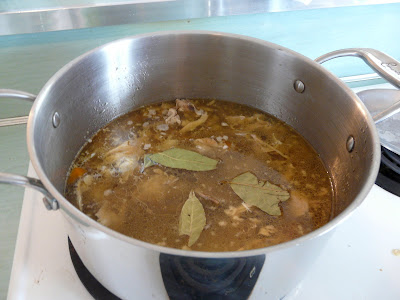 Whenever "later" is convenient- that night, the next day, cover the bones with some more water, add some spices and bay leaves. Bring it to a boil and then let it simmer for about an hour. 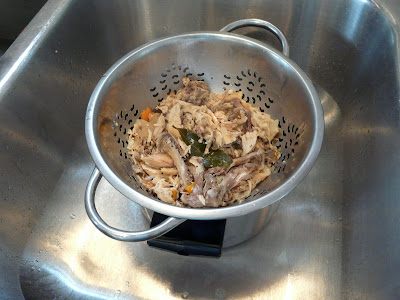 When it's done, strain the bones. I use a colander over a pot/big bowl first, then a strainer to make sure all the little bones are out. You now have AWESOME homemade chicken stock. I got 4 1/2 cups from mine. Isn't that super easy? Now you can freeze it in ice cube trays for 1 oz. portions for other recipes or use it to make brown rice (soooo good) or make a pot of soup. I made minestrone soup so we would have lunch that day. We still have the chicken meat and leftover soup. Totally manageable right? If you buy those rotisserie chickens from the store, you can do the same with the carcass. But who needs those chickens when it's so easy with the crock pot. We used to get them ALL the time. Now I can't remember the last time we bought one.

There you go. My Show-And-Tell with roasting chicken. I'll try to do this more often. I love getting a peek into how other people do things. Hope you find it helpful too!

Crock pot chicken RULES! I usually cook it on low all day with a some water, maybe garlic and/or bay leaf, seasonings, & some combo of carrots, potatoes, onions, & celery. My two fave finishes: at the end of the day, take the chicken out so it can cool off to the touch. Turn crock pot on high. While chicken cools off, add to crock pot either (1) some large sea shell noodles to soak up all that delicious juice, or (2) some corn & milk (or 1/2 & 1/2 if you're feelin' naughty). When chicken is cool enough, separate it from the bones & skin & add it back into the mix (I usually save some for a later meal). You end up with either (1) super bomb chicken & noodles or (2) yummy corn chowder. Both are great comfort food on a cold day. Let me know if you try it & ENJOY! Can't get my yahoo ID to work, but it's me - CFJSfamily

Haven't tried it in a crock pot - have to give that a shot. I usually cook a chicken on Sunday afternoon (sometimes 2). Make a cassarole or two out of one, shred the other for lunchmeat (we are trying to avoid all processed foods, high sodium and cholesterol foods), then cook up the broth. I might use the broth in a risotto or something that week. We are even getting off mayo by blending live basil with a can of garbanzo beans, garlic, and olive oil. I use that for spread on the chicken sandwiches.
Love your blog! Thanks, Lisa!
Shauna

Chris- yum! I'll have to remember that for Fall/Winter. I haven't been really into comfort food now that it's warmer. I'm impatiently waiting for tomatoes, so I'm all about tomato based stuff. :)

Shauna- I love your garbanzo bean spread. yum!! how much of each? I usually make a tahini-less hummus (Sassy is allergic) with the beans and FF plain yogurt, garlic, salt and pepper (I think that's it) in the food processor. The kids gobble it up! I haven't made risotto yet. scares me for some reason.

Hey Lisa -
I usually use a can of garbanzos, several full sprigs of basil, a teaspoon of garlic, and olive oil to get the consistency right (usually a tablespoon or two). It is fab with some asiago in there also.

I hadn't thought of substituting yogurt for mayo, but it totally makes sense. Thanks for the tip!