BigBoy in the Big Apple 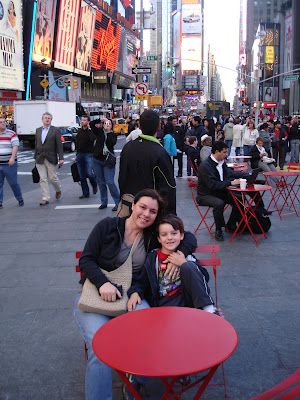 I took the train up from VA to NYC over a year and a half ago, for a Sister Trip for the holidays.  BigBoy was not happy.  "'Why don't I get to go?"  I explained to him how much walking you need to do, you have to listen and pay attention and little kids just can't go.  I decided on the fly that 6 was the magic age.  I really thought he'd forget and something else would be the most important thing ever, taking its place.  nope. no dice.  at his 5th birthday:  "When I'm six I get to go to New York with Mom!" And then of course at 6, he remembered. He cashed in and I had to pay up on my year and half old promise.


BigBoy and I took a long weekend trip to NYC. Imagine if you will, being trapped with Buddy the Elf. really.


Spin around continuously in the revolving door. check.
Pick up nasty things from the street and play with them. check.
Jump up and down and clap due to an approaching subway. check.
Say "Thank you" and give the courtesy wave to taxis stopped at the crosswalk. check.
Dragging legs and complaining it's.just.so.much.walking. (after getting off the subway). check.


I was waiting for him to start pouring maple syrup on his spaghetti.

For some reason he is in love with the Statue of Liberty.  I think this is what sparked his interest in NYC in the first place.  So of course, SOL was a must do.  We also managed to fit in seeing Little Airplane Studios, Lion King /Times Square and Central Park.  We used a double decker bus tour that you can hop on and off all over the city.  Not my first choice, but I realized after the fact, that it totally fit the bill.  Squeeze in your various trips on the subway, rides in glass elevators, ice creams a la Mr. Softie, hot dogs, petting a mounted police horse, cab rides and you have yourself a fabulous 6 year old trip to NYC!

I also realized how country lovin' my kids are.  BigBoy was excited about everything.  and overwhelmed.  But he truly shined at Central Park.  He ran "off hand" and couldn't wait to climb all the boulders.  He was beyond happy and totally in his element again.  He listened to me again. Paid attention to his environment again. He was in control of his world again. It was nice to have him back for a fleeting moment.


But I was also proud MamaBear.  He was polite and independent. Ordering for himself in the cafes and always saying thank you and please. I'm also here to proclaim that New Yorkers aren't mean and nasty or unfriendly.  They ARE impatient, but luckily we were doing things during the week and off rush-hour times.  People smiled a lot at him, helped him and engaged him in conversation.  They were NICE.  and helpful. pinkie promise!

The trip was a fantastic experience for him and at the end of the day, all the hyperventilating and shvitzing I did worrying about BigBoy being taxi-road kill was totally worth it.   He won't remember mom freaking out about him not holding my hand on the sidewalk. or pulling him back after leaning over too far at the subway platform. or telling him over and over not to touch ANYTHING.  What he will remember is seeing Lady Liberty for the first time. or how awestruck he was seeing the "animals" at the Lion King. or how the Mr. Softee guy flipped his ice cream cone upside down before handing it to him and both of them cracking up together. or how fun it was climbing the rocks at Central Park. or the coolness factor of riding up 20 floors the glass elevator in the middle of a Times Square hotel. THAT makes it worth it.

I'm not so sure I could handle another trip like this anytime soon, but I'm happy we were able to pull it off.  Thanks Aunt Bebe and Mr. Andrew for your hospitality!!  Now Sassy wants to know when SHE gets to go to NYC, just girls, and see Lion King too. sigh. I need another cupcake.

City Sights NY Double Decker Tour Bus, all around town + Statue of Liberty Ferry
Tour ride south to Battery Park
Statue of Liberty  unless you get there at the crack of dawn, it WILL take you all.day.long.
Tour ride north back to Gramercy

Walked with my sis to sugar Sweet sunshine (BEST cupcake evah!) a must-do on MY list. ;)
Madison Square Park. Note: they have a cool art installation going on, statues are located on top of random buildings all over the area.  We had a lot of fun finding them.
Penn Station, Home!

What a great memory for both of you! So glad you did it!

I loved reading this! :)
It sounds like you two had a great time in NYC! :D Unforgettable, in every way. (Buddy the Elf. HAHA! I love it!)

Buddy the Elf - hilarious! Joey has been wanting to go to NY since he was 3 or 4. I knew it wouldn't be fun when he was so young (other than playing in Central Park), but I think he's ready now. Maybe this summer .... :)

Anon- Please stop leaving random comments. I tired of deleted them from this post and you aren't adding to the conversation. Thank you.