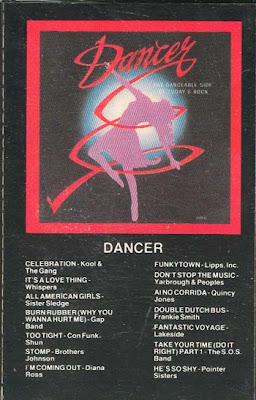 I had a mental post going, actually a few, but then Monday became a very industrious and fun-filled day.

I worked out.  Yes, you read that correctly. Jillian and I started up our love affair again with The 30 Day Shred.  Last year I had just started rockin' my Shred Action and the Great Flood of 2009 hit our basement.  My working out seemed to lay stagnant along with the water.  So I dusted off Mr. Snarky (our wii fit) and Jillian.  I must  be a glutton for pain and humility.  But I got that out of the way in the spirit of Eating The Frog early in the day.

Sass and I had lots of batch cooking and food prepping to do for the week.  I cooked some dry pintos, made hummus from garbanzos from the freezer, made hard boiled eggs, baked two loaves of wheat sandwich bread, browned 2 pounds of ground turkey and we started a double batch of brownies!  And then BigDaddy came home and created major havoc on our industrious day.  God love him!

He brought up the song Double Dutch for some reason with Sass.  And then, because technology can make it so, Double Dutch Bus is thumping from the laptop speakers.  Meeeeemories.

This song reminds me of being around 10 and listening to my mom's K-tel "Dancer" tape-- a compilation of disco songs. I loved it more than life itself.  I played it over and over and over. and over. I had created dance routines to most of the songs.  Double Dutch Bus was on it.  And so was Celebration by Kool and The Gang.  These were the first songs that I played because I wanted to hear them, not because my parents were listening to them.  Me.  Celebration continues to be one of my most favorite songs in the whole wide music world.  It was our recessional song for our wedding. No lie. Yet another reason why I love this man.

I would never claim to be a "Music Person."  I have an ipod I never use. I never know the artists names of songs I like. unless you count Laurie Berkner, which I don't. I don't have a genre per se, I like what I like. and it's really a mishmash of things.

But BigDaddy started to play other songs on youtube and we were off!  ooooh! remember this one??  okay, my turn!  Okay, I have another one! In typical lunzy form, I could sing most of the words, though badly, but I couldn't guess a single band name.  But the songs.  The music. The memories.  I did have those.

Buffalo Gals- My cousin had the record, probably the 12" mix and played it on my Mexican grandma's record player.  Not any old record player, but a record CABINET, full blow piece.of.furniture.  It was nice.  really, really, nice. Then my cousin started to scratch the record, DJ Rapper style, as we do-se-doed in the "nice" living room.  You know, the one that only company uses. filled with glass breakables.  and the Nice record player.  did I mention that?  I have no idea what this poor woman thought about a couple of crazy 5th graders dancing around to this "music" and scratching a perfectly nice new record.  Only in America, right?  I think she yelled something to us in Spanish, but I had no idea what she was saying and my cousin probably pretended he couldn't hear her (he was my interpreter.)  So we kept on do-se-doeing.

Soft Cell's Tained Love- I listened to this on the Mighty 690.  Yes, folks that would be AM radio.  Same cousin and I would call in and request this song all the time.  AM Radio.  'nuff said.

The Specials Message to you Rudy- Jr. High and my sweet boyfriend, Mike.  He loved Ska music and introduced me to something I never heard coming out of my parents cassette/8-track player.  He was in band, a trumpet player, and even gave me the mouthpiece to his trumpet, I think his first one? I still have it somewhere... The creepers. The black and white checkers. A totally different world. I loved listening to The Specials. My parents had no idea what the heck I was listening to. Which made it even sweeter.  I started to listen to the radio all the time. and bought record albums. and I watched videos on Video One with Richard Blade on KTLA.  We didn't have cable at that point.

I became part of the New Wave music movement.  I was a child of the '70s, but a teenager of the '80s.  Sadly, BigDaddy was a Hesher -a Metal Head with long hair and lots of earrings.  We don't exactly hold the same songs dear.  He did however have a friend that was a New Wave fan.  Thanks Jorge!  So he is pretty familiar with my favorites.  I fell in love with Depeche Mode, Madness, Violent Femmes, The Cure, Siouxsie and the Banshees, The Clash and Big Audio Dynamite, Echo & the Bunnymen, Psychedelic Furs, OMD, The Specials, New Order, Erasure, Oingo Boingo, The Smiths, Pet Shop Boys.... KROQ.  MY music.

Music weaves itself in and our out of lives.  School dances (White Lines) Or being heartbroken and listening to "our song,", adding further torture. (Groovy Kind of Love) Or singing with friends on the way to the beach on Ditch Day. (Joy and Pain) Or hanging out in the back of the school bus with friends reciting lyrics. (West End Girls) Or driving around on a summer night just 'cause (Dr. Feelgood) Or hearing the same song over and over during practice for a competition routine. (Groove is in the Heart) Or post-football game parties (Blister In the Sun)  It makes it feel like yesterday.

It was fun going down memory lane via youtube.  Sass shook her groove thang, of course.  And we had quite the dance party going on.  I wonder what the munchkins will have on their memory list.  I have lots of Beatles and Disco on mine from the early years.  But we tend to listen to a lot of Latin music (Salsa and Jazz), pop,  and rock (courtesey of the resident Head Banger) with kid choices of Gene Loves Jezebel and Beyonce thrown into the mix.   We are currently creating their personal soundtracks.  What makes The List?  What will be "their parents' music"?   I can't wait to hear it!

Tell me what's on your soundtrack and why?

I want to comment - but I have to think on that a while.

Sis - I always think of you when I hear The Cure "Friday I'm in Love!" I remember being in your little car with the sunroof that you had to wind to shut/open and we'd drive around the 5 listening to 91X and you were singing that song. :) Thank god you were right down the hall when I was 9 because I could have been a whole lot dorkier!

Memories! Makes me want to hop on and pull up songs myself on youtube. You and I obviously share many favorites....I heard the Specials the other day and couldn't help but think of you of course. And I think of my brothers bruises from mashing at Oingo Boingo concerts that I was never allowed to go to. Further back though- my dad was a huge James Taylor fan and I think it is still some of my favorite music.

I remember driving down the coast on our way to Santa Barbara (16 years old) and singing (more like yelling) the Beatles. And then of course there was Johnny Mathis for love songs. I am dating myself but I liked music so much more then, than now.

Beege- Ah, Avi, the Avocado Green Mazda. Now I have that song in my head...

Nikki- I was totally thinking about you through so much of this. Especially with Howard Jones and Big Audio Dynamite. I forgot what an Oingo Boingo fan your brother was!

Ah, the 80s! I've been meaning to write about music on my blog ever since I started it. It's just too big, you know? Anyway, I wanted to share a music memory that your blog just brought back to me. About 10 years ago, I was riding the Cal State Long Beach shuttle bus on my way to class with a bunch of college kids. That song "Miss Jackson" (Outcast) came on & the whole bus started singing along. "Didn't mean to make your daughter cry, I apologize a trillion times, I'm sorry Miss Jackson, I am for real." It was awesome and so much fun!