Good morning from the Great Northwest! And still no coffee in the house. sigh.


We're currently on Leg Two of our Big Fat Summer Vacation (BFSV) -- the "mom and dad need a cocktail and the munchkins need to have some quality time with Nana and Grandpa" part of the trip. If you have read blog for even two minutes, you know a) I heart Twilight and b) we are going on a TwiTour to Forks and La Push as part of this trip. Squeals and claps…

We decided to crash and burn the first day with driving non-stop from the LA area to Oregon. A 16- hour day of driving fun. We'd rather get most of it out of the way at the start and then be able to meander our way back home. We shot for Eugene, OR as our stopping point, aggressive yes. But really, when you don’t have two munchkins in the car with you the time literally flew by. Speaking of the munchkins. BigBoy wanted to make this adults only trip start off as guilt ridden as possible. The night before, I was putting him down for bed and he started crying, “Mommy don’t leave me! Take me with you! I’m going to miss you too much!” Gee thanks, kiddo. Sassy on the other hand was all about Nana. No Mommy for nuthin. “I want Nana!”Gee thanks, kiddo.

So we headed out in one of my in-laws’ cars (thanks Memaw and Pepaw!) and hit the road. Just me and BigDaddy… and Edward. Yes Edward, the Roaming Vampire (the Roaming Gnome’s second cousin, once removed) is making the trip. When he heard we were heading to Forks, he begged to come along. He batted his golden eyes, sparkled a bit and I was a goner. 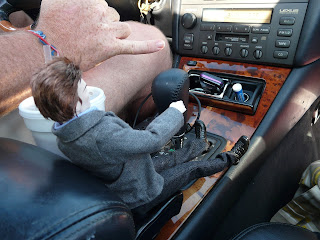 It's a bit surreal that we won’t have the kids for such a long time.  It was also strange that I was driving through my old stomping grounds without a clue as to where I was. I didn’t spend a ton of time as a driver in my home town. I finished high school and got the heck out, eventually moving farther and farther south and then farther and farther east. So it dawned on me that I really didn’t know my way around as a driver. This gave me a new view on LA, a totally different perspective. We made a large sweep from the East and headed north (via the 210) We eventually made our way to the Grapevine. Time for a little lunzy siesta. Travel Tip: don’t let your husband listen to Ray Charles as you nap. The musical horns eerily mimic the cries of children. Kid. You. Not. I woke up in a panic to my non-existent crying babes. Sigh.

(Warning: dusting off my soap box for the next section)

As we traveled north on the 5, I realized my older, wiser, tree high-fiving self was totally checking out the farm crops and wondering how much Monsanto ruled the land. BigDaddy and I were trying to identify what was growing and wondering what the politics were behind the produce. You could tell something was up as signs were sprinkled about saying “congress made dust bowl” and something about no water, no crops. We also saw a big beef farm right next to a corn field and quite a bit of brown water. Eeew. The entire region was used for farming and we saw quite a few fields with migrant workers…. I don’t even want to think about their working environment. It was beyond hot and dusty and just miserable. But this is cheap food, people. Acres and acres. We stared at the cows and BigDaddy said to me “I can’t wait to get our Polyface Beef!” Proud MamaBear moment!

We needed a booty break and decided Bakersfield, CA would be a gorgeous location for some photo ops. Okay, not really. It’s kind of the armpit of CA, but they had an IHOP! Done deal. Edward joined us to keep appearances for the whole “human” thing. 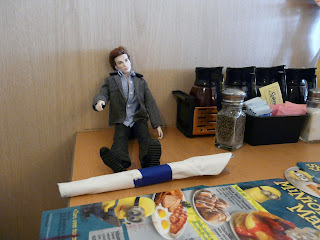 There’s not a whole lot to mention about traveling up the 5, other than food, shocker right? We stopped at the Olive Pit in Corning, CA due to the power of their multiple billboards along the highway. “Olive Tasting Bar!” sealed the deal and we made a detour. We were hoping for more of a dive, but it was actually really nice! We also hit In-N-Out, of course! 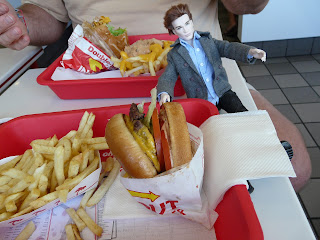 We made it to Cottage Grove, OR (just south of Eugene) about 9:30 PM and crashed for the night. Edward sat on my nightstand and watched over me while I slept. It’s sweet in a creepy, stalker kind of way, right?  Nonetheless, I crashed with Eddie by my side and sweet dreams of Forks...

Love that you got away without the kids. Now I know who Edward is. Too funny.